Path to Citizenship: 6 Steps to Becoming a Naturalized American

Path to Citizenship: 6 Steps to Becoming a Naturalized American 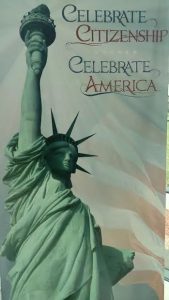 Those who are not born in the United States and do not have American parents must follow the path to citizenship to become naturalized Americans.

While there are special methods to take in becoming a citizen if an individual is the spouse of a U.S. citizen or is part of a military family, most people will follow a certain process. Once an individual becomes eligible to apply for citizenship, the process typically takes six months to a year, sometimes longer, according to the American Immigration Center.

Here are the steps to becoming a naturalized American.

1. Obtain a green card.
The first step to naturalization is to obtain a green card and maintain residence in the country for five years, according to the U.S. Citizenship and Immigration Services.

2. Maintain a physical presence.
Immigrants must be physically present in the country for 30 months of the five years needed to apply for citizenship. Applicants also must live within the state or USCIS district with jurisdiction over the applicant’s place of residence for at least three months before applying.

3. Complete the USCIS form N-400.
Petitioners fill out their background information on the form, which also enables them to do things like have a legal name change. Applying is not cheap, however. Completing the form costs $595 and an additional $85 biometrics fee, according to All Law.

4. Be fingerprinted.
Once the application is accepted, a date will be set for fingerprinting and biometrics at a local office. These will be used to perform a background check done by the Federal Bureau of Investigation.

5. Pass the interview and naturalization test.
An appointment will be made with a USCIC officer for an interview to review the N-400 form and answer questions the petitioner may have. The examination requires those who wish to become citizens to have an understanding of English as well as civics, including U.S. history and government. There are some exemptions and waivers. Participants are given two chances to the pass the test.

6. Attend the oath ceremony.
The petitioner may be approved for citizenship at their interview or shortly afterward. A public ceremony will eventually follow where those who are becoming naturalized will swear an oath of loyalty to the United States. Individuals will be granted a certificate of naturalization as proof of citizenship.

*****Regarding step 5:  Platte Valley Literacy Association partners with Centro Hispano of Columbus and together we work with the USCIS to help with the naturalization process. PVLA handles the Civics, U.S. Government and History portion of the test. PVLA has classes twice a week with morning and evening classes available. We understand how hard and how expensive it can be to become a U.S. Citizen, and with the help of Centro Hispano and USCIS we are here for you every step of the way.